Can a seizure be comical? Until Friday, I'd probably ram you very hard with my wheelchair if you even suggested the mere idea that there's anything positive about a seizure. Well, Destiny proved me wrong (again!).

So, I gave my daughter a very long seizure on Friday, in a full-hearted attempt to "normalize" her. Yes, I have two college degrees but that don't make me smart! ;-) just a good test-taker.

I prepared four menus for Friday, just as I do every day. The dietitians told me that I would need to learn to be creative, but they never really defined what creative might look like. To make an excruciatingly detailed story short, I inadvertently loaded breakfast, snack and lunch with her protein and carb allowances - to make it appear more like her fellow campers meals - neglecting her of burnable fats. Desty burns fats for energy, not sugar and carbs. Friday was an active day at camp, thus she must have been goin' on fumes by afternoon, or her body tried to switch to burning carbs again. Anybody's guess!

Desty took a nap, and wouldn't wake up. She was unresponsive, appearing in a very deep peaceful sleep. I got the call and luckily I was only ten minutes away. I wasn't convinced it was a seizure so I didn't want anything done until I arrived. David, the camp director met me in the parking lot, and I literally raced him to the staff room. As I rounded the corner and saw my baby spread out on a mat, comatose-looking, I allowed myself a free 10-second period of devastation. David picked her up laid her in my lap and I went into action. Pure mother's intuition here...I *think* I felt a tiny tremor...

Okay, this is the funny part...the part that may forever change 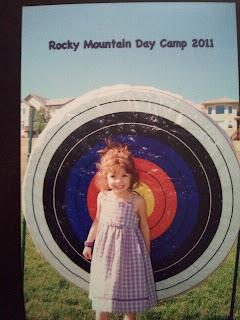 how I internalize seizures, especially on this "Magic Food" Diet. We administered the Diazepam and my little girl sat straight up, looked around, stood up pulling her pants up, and cheerfully said, "I'm ready to go back to camp! Where's my other sandal? Hi Mom!". There were about six mouths on the floor, including mine! David's mouth may still be there! LOL! Buck, who has seem most of her seizures, calls it "spooky".

We know this seizure lasted at least 15 minutes, but it could have been more like 40 if it was the duration of her nap. I admit, I shook for a few hours that evening, trying to decide if I had to count this event as a 'daytime seizure', if it happened during a nap. I have since decided, for my sanity, that I don't care because I know the cause, and it was a fairly low-trauma reality check.

Albert Einstein said, "Reality is merely an illusion, albeit a very persistent one."

The Ketogenic Diet is merely another medication - the most effective yet! - not Desty's cure. No matter how effective the Diet is, she still has Dravet. Period. For the time-being, the Keto Diet is the treating mechanism and I am the pharmacist.

Another Keto-mom told me that now, when her daughter seizes, it's probably her fault, and we all do our best and, slip up, pay for it, then we continue.

If the past eleven days are not a fluke, if this Diet continues to keep the majority of my Destiny's seizures under control, then, on occasion, I will gladly where a badge that says, "I gave my daughter a seizure today; what did you do?!". After being through what we have this past year with seizures and the unknown, I embrace the illusion of some control!

I have been wondering if she is growing a bit irritated of the Diet because she knows she had a seizure, so this morning at breakfast I very carefully and briefly explained that she probably had the seizure because I messed up her meals that day.  She didn't pay much attention, but tonight at dinner she asked if she could whisper something in my ear...Proudly..."Mama, you know how  I had that seizure when you messed up my diet?  We all make mistakes, Mommy!"


- Posted using BlogPress from my iPad
Posted by Destiny Ann at 11:55 PM

You have one smart daughter Tammy! Be sure you forgive yourself as quickly as she forgives you. You are awesome and give your children so much. I hope you all have a wonderful 4th.
Looking forward to reading of your adventures.

You can wear your Oopsy badge right next to your Perseverance badge. Desty knows she's lucky that you're her mom. A toast to Keto and the Summer of Hope.

Hang in there,Tam. You're doing a great job with your family. Destiny and Benny are adorable and are building character and compassion every day. Love to you.

Please check out "Wings for Destiny", a blog dedicated to raising awareness and medical funds to support Destiny's life with Dravet Syndrome

HOW TO HELP DESTINY