Last night we returned to Boulder after spending the weekend in Salt Lake City. First of all, thank you to Mee-Maw and Papa Icky, who took the kiddos on short notice which allowed Dustin and I to visit Diana and help out where we could. Diana is one of my bestest Utah friends, and more than that, our hearts and our families are bonded together in many ways.

I met Diana in August '01 - one month after I arrived in SLC. She was considering a VISTA position at Disabled Rights Action Committee, but decided against it. (At the time, she had no known physical disability.) Diana and I met again at VISTA conferences, at various community events and finally through church, where our friendship eventually blossomed.

We were pregnant together, and we delivered our first-borns on the same day (so TRUE!)!! Benny and Samara drooled together, screamed together, napped and played together. Destiny was born, then came her little Spencer. Diana is much like a sister to me - we count on each other for help and support, to laugh with or to cry on, to celebrate milestones, and exchange advice, even if much time lapses between visits.

Diana taught me how my family of four could survive off of $1,000/month in

Utah...If there is a freebie to be had, she will find it AND share it! LOL She found what would become Desty's "Bunny Blanky" - this soft little pink blanket that Desty has been attached to since birth. Diana is the best friend a person can hope for, and I'm afraid I take our friendship for granted too often.

Last Monday when I learned Diana was in ICU, I was utterly shocked and mortified. It was just two years ago that she learned she has a rare form of MD. To make a long story short, we packed our bags and left for SLC on Friday at 5AM. Diana was out of ICU by the time we got there, and in Neuro Acute. Despite all of the pain that she is in, the drugs, and all the machines and gadgets she is attached to, Diana is still Diana with her beautiful smile and quick sense of humor. She cannot talk yet after her tracheostomy so Dustin and I did a lot of lip reading.

On Saturday, Dustin and Troy (Diana's hubby) took all four kids to Classic Fun Center, and they had a blast! I'm still tickled that they tried to get the "Mom's Special" discount. :-) The clan went to the Bounce Zone, the Jungle and concluded their exciting day by skating!

On Sunday evening Dustin and Troy took a hike into Millcreek Canyon. It was great for the pair of them to get away. The guys have the same problem - their wives can only go on accessible hikes and their kids can only do short hikes. I'm glad they went - they'll have to go on more dates in the future!

All I wanted to do was hang with Diana, and spend time with her babes. There were times I would've given anything to take her pain, but the reality is, I would've probably given it back within sixty seconds. This is rather twisted, but I wish all doctors and nurses had to experience that sixty seconds of pain as Diana knows it...The medical realm would be much better for it.

For the first time in my seven years traveling between Utah and Colorado, I wanted to stay in Utah longer. In the three days we were with Diana, her improvements were significant. I would like to be there as she gets into her wheelchair again for the first time since she got sick, or as she enters her home again. I cannot wait(!!!!!!!!!!) for her to get strong enough to use her artificial voice box, and let those nurses really have it! But I need not be there, as Diana has an unbelievably large community of family and friends who will be there every step of the way.

This a picture of Diana and I a 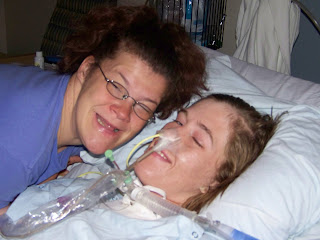 t 5:40 on Monday morning, as Dustin and I prepared to retrieve our kids from Mee-maws and return home.

We made a deal: Next time we see each other, we will BURN THIS PICTURE!!!!!!!! Yesterday she got her ng-tubes out (meaning no tubes up her nose!) Progress!!!!

Benny made these drawings and he's mailing them to his friend, Samara, tomorrow......

That bunny blanket has been a lifesaver - well at least it's helped us get some sleep. Trying to get Desty to sleep without it is a real nightmare (it got left at home when we went on a trip once and I won't even try to recount the night we experienced). I try to wash it inbetween morning and naptime, but even then I have a hard time sneaking it away. This Blankie is Desty's most prized possession and probably the most used gift we've our family has ever been given. We've tried giving Destiny other blankies but she only will accept this one from Diana. I've tried to find a replacement that looks just like it but have had no luck - my only clue are the letters P,B, and K inside a block on a tag. My guess is this blankie was made for Pottery Barn Kids. The funny thing is, if I had asked Diana to help us find this exact Bunny Blanket, she probably would have found it a long time ago.

Glad to hear Diana is making great improvements! Brings back some bad memories of when I was trached. Scary stuff but glad to hear she has the support of many!

It makes me sad that it takes something bad to happen for me to remember how lucky i am in life!! I think about Diana a lot! Tammy if you need to talk or vent leet me know. I hope you guys know how much i love you and think about you even when i'm not great about showing you. I am always bragging about you. I am so happy for you guys. You are raising such great kids, and you insprie me to constantly better myself (school). PLease know how much i love you.

I hope she's better and you both have burned that picture!

Please check out "Wings for Destiny", a blog dedicated to raising awareness and medical funds to support Destiny's life with Dravet Syndrome

HOW TO HELP DESTINY